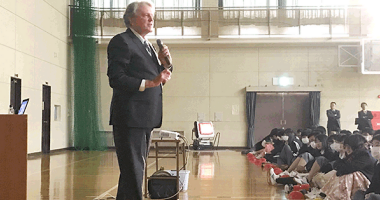 【Date】January 30, 2019 (Wed)／【Venue：】School Gym
Title: "How Will the English Language and its Place in the World Change in Your Life time? How Should We Prepare?"

Professor Edward, who is the instructor at our school 's Incandescent English Classroom, gave lectures on All English for the first and second year students.What kind of history has English gone through to establish itself as the language of the world today? What kind of global views should we hold to communicate with people of the world? Such are the topics of the lecture, which is easy to understand as it encompasses a quiz as well. After the lecture, there was a survey and 67.8% of the students commented that they "understood the content of the lecture very well, or fairly well". This is higher than the 61.5% from last year's English lectures. Moreover, those who commented that they "have improved in their global view and ability" came up to be 87.7%, which is the same as the previous year's proportion. Even though there might be some incomprehensible parts, it seemed like a majority of the students had a good grasp of the subject matter of Mr. Edward's lecture.

· It was refreshing to hear Professor Edward who speaks English as the first language talk about English. I was happy that I could understand most of it despite my English ability.
· As I had taken an Incandescent English course for the first and second term, it was very easy for me to understand.
· There were words that I could not understand as it was all in English, but it was fulfilling time to be able to teach with the people in the class.
· It was a good opportunity to reflect on how to handle your own mother tongue, and thinking about how to handle your language from now.
· I was worried that I might not be able to understand English, but my teacher's English was easy to comprehend and I could concentrate and listen. 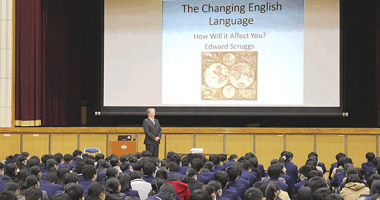